HOW TO FIND YOUR

Want to break the mold? You’ve got to find your Donna Style! This timeline gives you an up-close look at Donna Summer’s life and legacy, so read on and be inspired.

Prepare for your Donna journey with these classics! 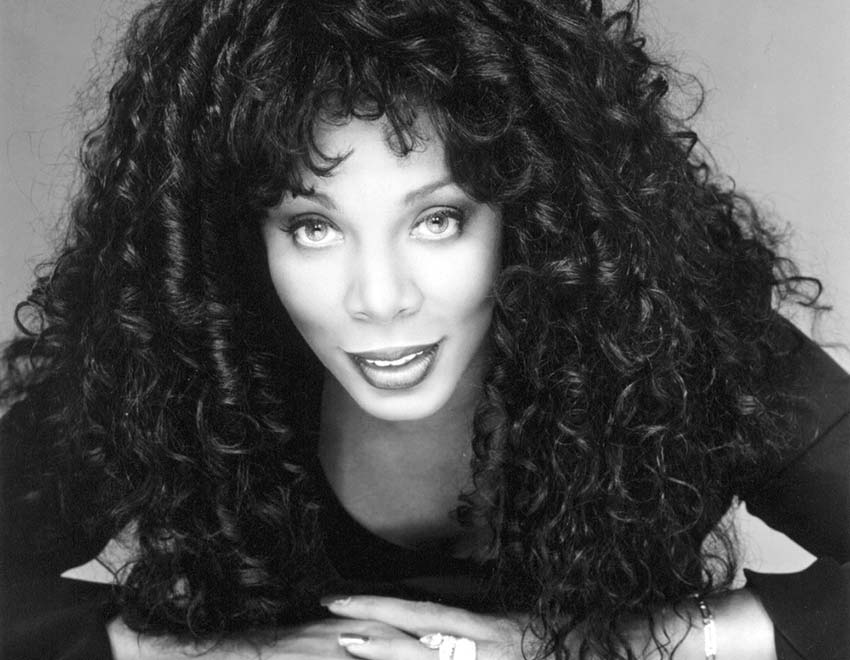 1959: The future superstar. At 10 years old, she sings in public for the first time, when she steps in for a no-show singer at her church. She wows the congregation, and later she describes this moment as the start of her singing career.

Who sponsored the summer camp Donna attended as a child?

The Salvation Army. As an adult, she consistently supported their charitable work.

1967: Opportunity knocks. Still a teenager, Donna moves to Germany to perform in the musical Hair. While she’s there, she also makes her first records.

1974: What’s in a name? Donna marries Austrian actor Helmuth Sommer, and they have a daughter, Mimi. Even after they divorce, Donna keeps his last name, changing the spelling to “Summer.” 1975: The team makes good. After releasing a string of hits in Europe, Donna, Giorgio, and Pete write “Love to Love You Baby,” which is their first American smash. Many of Donna’s chart-toppers are created with Pete and Giorgio, and they quickly become synonymous with the music of the 70s.

What was the name of Donna's first European hit?

“The Hostage,” which reached #2 on the Dutch charts.

DID YOU KNOW? At the start of her career, Donna’s singles were never quite as popular in Germany, where she lived, as they were in other European countries. She used to joke that she could board a train in Munich as a regular person, but by the time she got to Holland, she was a star.

1977: Love is in the air. Donna meets Bruce Sudano, whose band Brooklyn Dreams joins her on the hit “Heaven Knows.” Donna and Bruce feel a connection, and they marry in 1980. They have two children: Brooklyn, born in 1981, and Amanda, born in 1982.

DID YOU KNOW? Bruce was also like a father to Mimi. When Mimi was married, Helmuth walked her partway down the aisle, and Bruce accompanied her the rest of the way.

"Last Dance" won the Academy Award. Which film is it from? 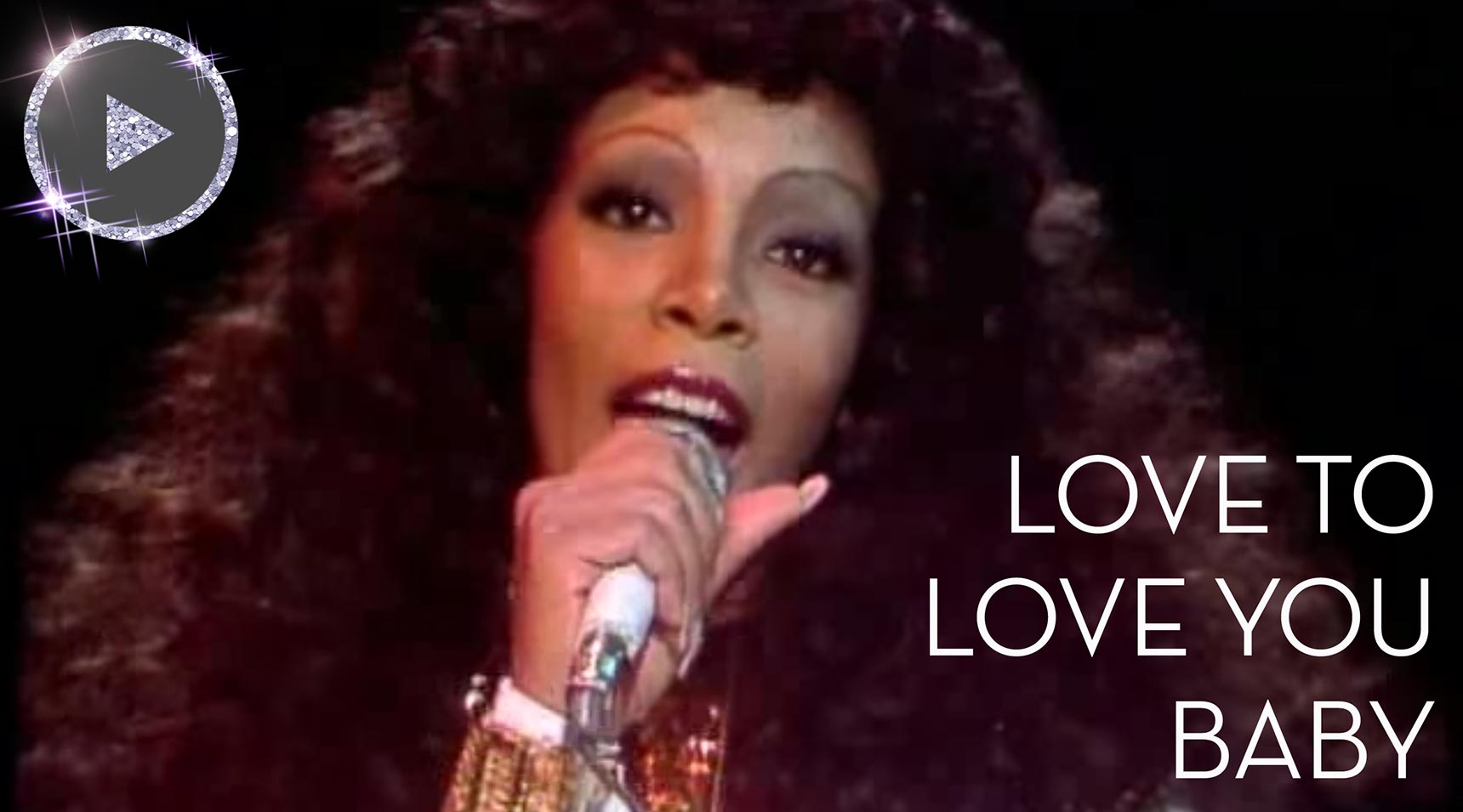 Originally, "I Feel Love" was the B-side for which ballad? Who was Donna's partner on the first all-female duet to reach number one on the Hot 100?

Barbra Streisand on “No More Tears (Enough is Enough)”

1975-1982: Dance is just one flavor. Though she’s known as a queen of the dance floor, Donna masters multiple styles. Her hits cover rock (“Hot Stuff”), pop (“MacArthur Park”), new wave (“The Wanderer”), funk (“Love is in Control”), R&B (“Heaven Knows”), and almost everything in between.

How many of Donna's double albums reached number one? 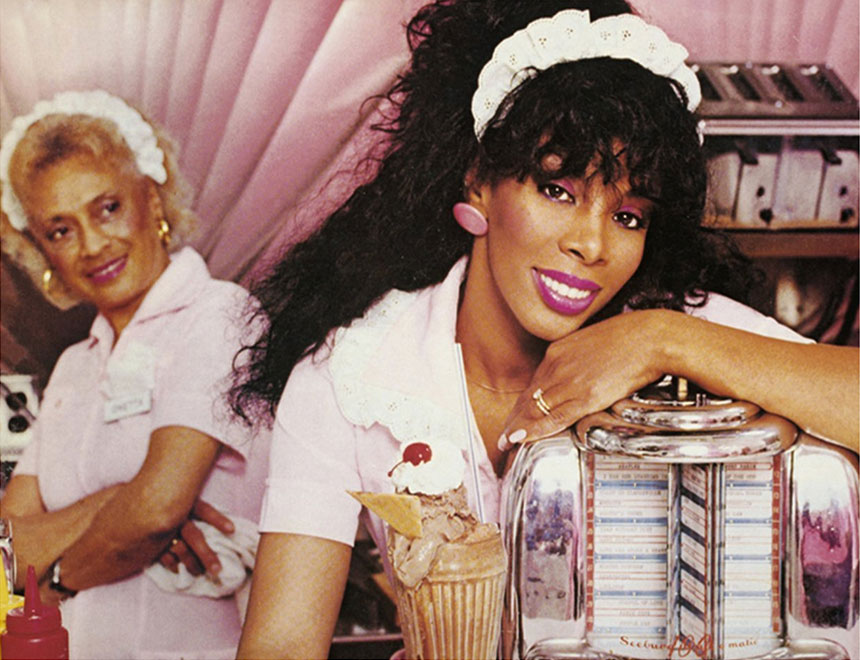 Onetta and Donna on the 'She Works Hard for the Money' album.

1979: What did you call her? Many of Donna’s songs are inspired by people she knew. “Bad Girls,” her longest-running number-one hit, is created after one of Donna’s assistants is harassed by a police officer who mistakes her for a street walker. Donna co-writes the song with Bruce and his Brooklyn Dreams bandmates, transforming that crude moment into a rebellious anthem.

DID YOU KNOW: “She Works Hard For the Money” was the first video by a black woman to be played in heavy rotation on MTV.

DID YOU KNOW: In 1980, the Grammys gave awards in Rock categories for the first time. “Hot Stuff” won Donna the award for Best Female Rock Vocal Performance, making her the first woman to win a Grammy in the Rock field. A sample of Donna's art 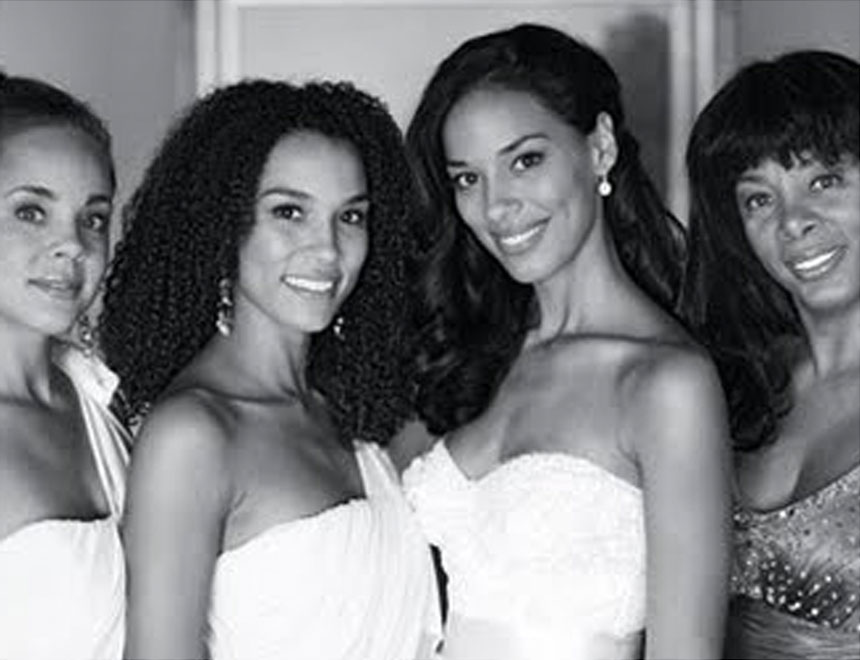 1989: A new art form. After years of writing songs and designing her own costumes, Donna pushes herself further when she begins exhibiting her paintings at galleries around the country. She soon gains a reputation as a notable visual artist.

1980-2012: Home life. Because she doesn’t want her family to live under the shadow of her stardom, Donna puts all of her awards in a box that she keeps in the barn on her California ranch.

1980 – 2012: Keep the faith. Donna prays every night, no matter what. Bruce remembers that sometimes, as they were talking before going to sleep, she would forget if she’d prayed. She’d get out of bed and talk to God for a moment, just to be sure.

The Grammys: She didn’t display them in her home, but Donna still received plenty of industry awards. Donna was nominated for 18 Grammy Awards and won five. Impressively, these Grammys were awarded in four different genres: rock, dance, R&B, and inspirational.

TRUST IN YOUR LEGACY

From Diva to Diva: Upon her death, a vast number of artists paid tribute to Donna, including Aretha Franklin, Dolly Parton, and Barbra Streisand. Beyoncé has spoken publicly about how much her own music has been inspired by Donna’s example, while musicians like Madonna, Rihanna, and Janet Jackson still carry on her legacy of creating unapologetically powerful music by and about women.